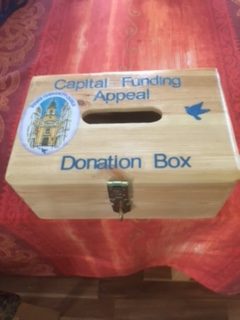 VCC capital funding started since November 2015 and as was reported before, we received the overwhelming donations from some members of VCC in the first quarter from November 2015 to January 2016. In the second quarter from February to April 2016, however, VCC received Euro 570 that is much lower than we had wished. (February – Euro100, March – Euro400, April – Euro70).  Please find attached the Table below for your reference. Table: VCC capital funding collection report Euro

S&F committee would like to initiate various kinds of promotional strategies to achieve our target collection from VCC members. Last Sunday, we found the Capital Funding Donation Box at David Corcoran‘s solo recital site as the first opportunity to collect donation and received Euro301.20. We thank David for his understanding of our fund raising initiative and also thank all the audience of the successful recital for their generous donation. The recital was held as part of the Rothgeb Memorial Award programme, which was initiated by Anne Rothgeb-Peschek as part of VCC’s 30th Anniversary celebrations.

Every Sunday at 12 Noon

Convenes after the Children's Sermon