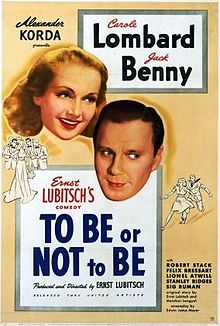 This complex story contains as much dark material as hilarious comedy and some romance in keeping with Valentines Day! A troupe of actors in Nazi-occupied Warsaw use their acting and disguise abilities to fool the occupying troops. Sometimes said to be Lubitsch’s best film.

Come at 6.30 and bring food. Drinks and popcorn will be available. The film will begin at 7PM.